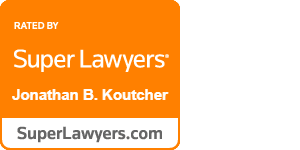 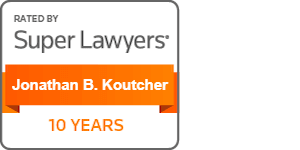 Jonathan (Jon) Koutcher devotes his entire legal practice to helping individuals in the Greater Philadelphia region who have been injured in work related accidents. He is a highly skilled litigator who has successfully tried complex cases before arbitration panels and juries.

Jon and his partner, Eric Pearson, have been recognized for their professional excellence among peers. Pearson Koutcher is designated AV Preeminent and in 2016 the firm was named a “Best Law Firm in Workers’ Compensation Law” by US News and World Report. Since 2011, both Jon and Eric have been named Pennsylvania Super Lawyers—an honor awarded to only five percent of attorneys in the Commonwealth of Pennsylvania. The two partners are Certified Workers Compensation Specialists as well, passing the test the first year it was offered.

Compassionate and caring, Jon is committed to providing outstanding results. He is known for giving each job injury client the individual attention they deserve. Eric notes that “everybody loves Jon.” He’s patient and sympathetic, a pragmatic and natural litigator. He also brings a calming presence to any situation.

Jon is committed to educating clients, their family members, and the community at large. He frequently speaks to unions and addresses other employee organizations on the issues and important questions an injured worker needs to ask.